Our business idea is lived by franchise partners in over 2,600 MBE locations and in 52 countries. Our goal is to offer companies and consumers a customized solution locally.

Founded in San Diego, California in 1980, Mail Boxes Etc. was introduced in Italy in 1993 by Graziano Fiorelli as Master licensee for the MBE brand. Since opening the pilot Center in 1992 the Italian MBE Network has grown to over 500 Centers. MBE Italy also subsequently acquired MBE Master Licenses rights for Spain, Germany and Austria.

In 2009, MBE Worldwide - a wholly owned subsidiary of the Italian Fiorelli family - acquired from MBE U.S. Inc., a subsidiary of UPS Inc., the Mail Boxes Etc. worldwide business (excluding the U.S. and Canada, which remain under MBE U.S. Inc.), including trademarks, business format and all existing Master Franchising contracts.  With the acquisition, MBE Worldwide became the sole owner of the Mail Boxes Etc. brand and franchisor of the MBE franchise system.

1993-2000
MBE Italy expanded to 300 MBE Centers and presence in 80% of Italian provinces thereby becoming the largest and most successful international MBE Master Licensee.

2000-2005
Master Licensees for Spain, Germany and Austria added to the portfolio. Network expansion increased to over 600 MBE Centers in the four European countries.

April 2017
Mail Boxes Etc. Worldwide has completed the acquisition of 100% of PostNet (www.postnet.com). Both companies currently operate in the business services industry offering premium quality shipping, logistics, printing, communication and postal services. The two companies will have an extensive reach of more than 2.300 locations in 33 countries.

2018
Mail Boxes Etc., PostNet and AlphaGraphics were able to close 2018 for the first time as a "network family" with more than 2,540 service centers in 47 countries and 861 million euros in sales.

The Mail Boxes Etc. Network grew through 5 new Master License Agreements in Finland, Hong Kong, Hungary, Morocco and Romania. "We are proud to announce this great result" - said Paolo Fiorelli, MBE Chairman & CEO - "2018 has shown how we can drive the organic growth of the whole Group thanks to the great commitment and dedication of our local entrepreneurs and staff at headquarters. Our teams, driven by passion, discipline and innovation, grew by constantly exceeding customer expectations, by perceiving #PeoplePossible as an attitude in their daily interaction with customers".

2020
To support further long-term growth, MBE Worldwide announces an agreement with the funds managed by Oaktree Capital Management L.P. to acquire up to 40% of the shares of MBE Worldwide through a €120 million ($132 million) phased capital increase. MBE's current shareholders, the Fiorelli family, will continue to own the majority of the company. "We are very pleased to partner with Oaktree in our MBE business," said Paolo Fiorelli, MBE Chairman and Chief Executive Officer. "We have ambitious plans to further expand MBE's competitive position, international presence and financial strength in the coming years. To achieve these goals, we have sought a valued investment partner with extensive experience and competent resources. With Oaktree, we have found both."

2021 has been a remarkable year for MBE Worldwide: €1.01 bln of System Wide Sales - generated through our platform of 2,900+ Service Centers in 53 Countries, and €24 bln of Gross Merchandise Value traded through our PrestaShop platform.

"Both our local entrepreneurs and our corporate teams demonstrated incredible levels of passion and commitment" - said Paolo Fiorelli MBE Worldwide Chairman & CEO - "Furthermore, through the PrestaShop acquisition, we now aim at maximizing the opportunities coming from e-commerce thus supporting our long-term goal of becoming a leading platform for global commerce. Finally we kept investing in our technology to ensure best-in-class customer journeys and smooth operations across all our countries". #PeoplePossible 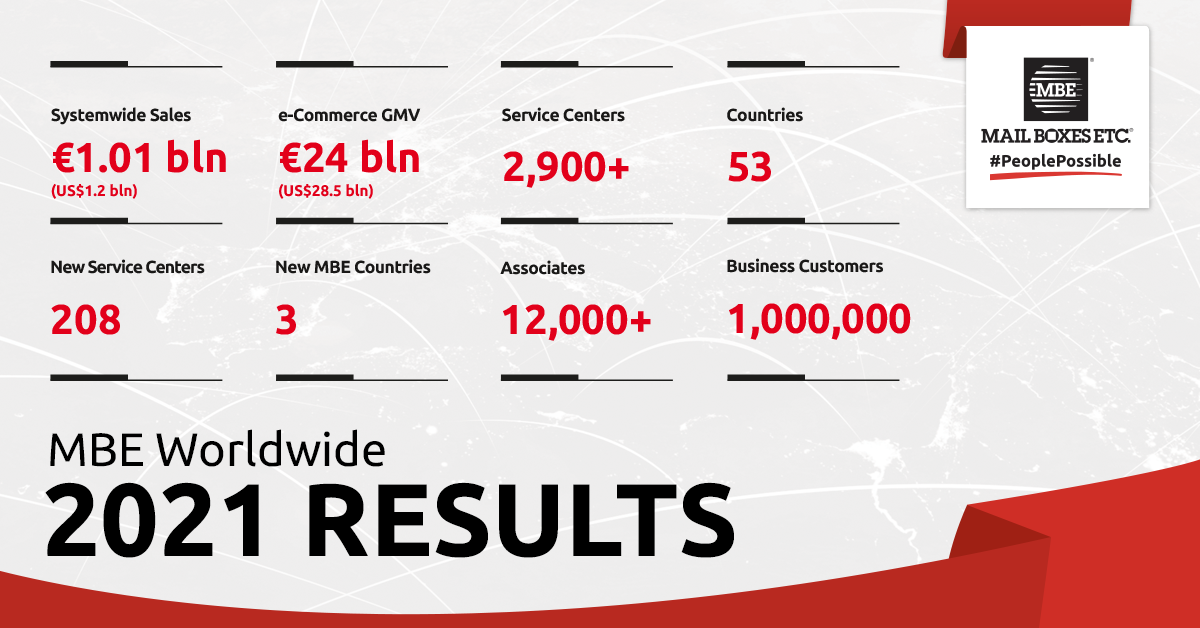 About MBE Worldwide
MBE Worldwide S.p.A. ("MBE"), a private holding company based in Milan, Italy, is a third-party provider of shipping, fulfillment, printing and marketing solutions for small and medium-sized businesses and retailers, primarily through a network of independently operated franchise locations. MBE Service Centres facilitate the activities of entrepreneurs, individuals and companies through an easily accessible distribution network and tailor-made services and products, characterised by excellent and unique service. MBE currently operates with three different brands: Mail Boxes Etc., AlphaGraphics and PostNet. The global network currently has more than 2,600 locations in 52 countries with more than 10,000 employees and a system-wide turnover of 918 million Euros (1,028 million dollars).

Further information about the MBE Worldwide Group is also available at www.mbeglobal.com

Mail Boxes Etc./MBE Centers are operated by independent operators as franchisees, who operate under a franchise agreement under the brand name of MBE. Through its franchise network Mail Boxes Etc. provides support services for businesses and individuals. Logistics and shipping services represent the main services of MBE – enabled by MBE through contractual agreements concluded for the benefit of its franchisees with the main national and international express couriers - and other graphics and printing services - provided either directly or on the basis of agreements with large printing centers. The promotion of services for business and private customers is carried out in the framework of the business activity of each MBE franchise partner within and outside of the MBE Centers ("farming"). Each franchise partner is contractually obligated to perform such activities. Mail Boxes Etc. and MBE are registered trademarks used with permission of MBE Worldwide S.p.A. (All Rights Reserved). The services offered by the individual MBE Centers can vary depending upon the location. The material available on this Internet site, the information contained herein and any other relevant related data may not in any manner be copied, distributed, changed, republished, reproduced, downloaded or forwarded to third parties, without the expressed prior written authorization of MBE Deutschland GmbH. We accept no responsibility with regard to the unauthorized use of the material available on this Internet site, the information and/or the data contained herein.

At the moment there are no Service Centers in ##COUNTRY##.
If you are interested in opening a Center or acquiring the Licence please contact:

The MBE Center is not enabled or sold not online. Select a service or contact a nearest located end MBE Center for a quote.

Insert your ZIP code or address

Look under the other 160 MBE centers in Germany
Or you can open an MBE Center in your community.